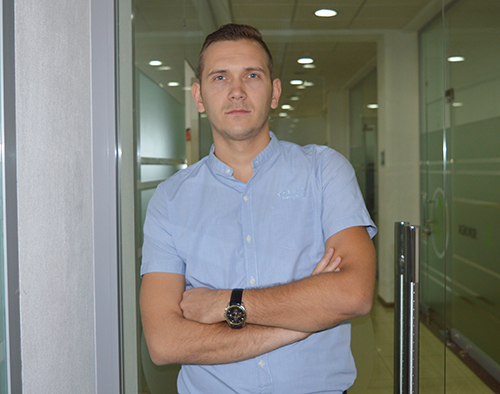 Graduated from Aviation Professional College at Management Faculty with a degree in «General Profile Manager».

After graduating from college, he entered the Aviation Institute, which was later reorganized into a polytechnic university, into the faculty «Operation of radio electronic equipment for airplanes and airports», to the specialty «Radio Electronic Equipment Engineer».

In 2010 joined «Agromir» company as a Sales Representative and began to show good results immediately.

Having worked as a Sales Representative for 1 year, he was appointed as Team Leader.

After graduating from the Institute in 2011, he faced a choice: whether to go to aviation or to pursue a career in trade. The choice he made was not easy, he has weighed the state of affairs in the aviation industry and in the sphere of trade. Considering his abilities and desire to work with people, he decided to stay in «Agromir» and tries to build a career.

Thus, in 2012 he was transferred to the position of the Commercial Representative of KAM (Key Account Manager), where, in the position of Team Leader, he additionally performed as Supervisor.

Having worked as the Commercial Representative of KAM for about 6 months, he was transferred to the position of Supervisor in the HoReCa channel.

In 2020, he was appointed sales manager of Greenup Trading LLC.

During theworking time in this company, he had a lot of trainings and seminars, for example, when he started working, he was immediately involved in trainings that develop sales skills: 7 visit steps, communication skills, persuasive sales format, overcoming objections, and conceptual selling.

Later, when he was transferred to a managerial position, he had opportunity to participate in external trainings, during that period he passed the following trainings:

The fact that he develops as a professional stimulates him to work in "Agromir" and to achieve the maximum results.