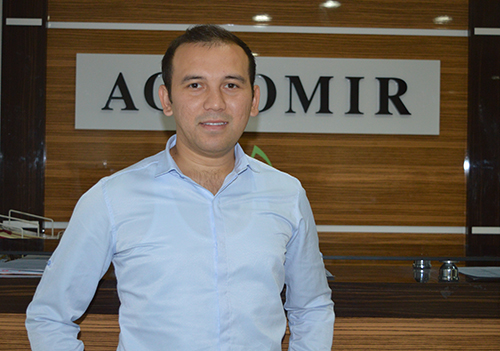 In 2000, he went to school number 101. After finishing the school, in 2009 he entered the Tashkent Professional College of Communications, and graduated in 2012.

A year before graduation in college, doing piecework part-time work, he was intensively looking for a perspective workplace.

Thus, in 2013 he had a chance to try himself in trade. He heard recommendations about "Agromir" company. He started his work experience as an intern in the PS1 team. The internship seemed interesting to him. Being an open and sociable person, he quickly found a common language with colleagues and became friends with the team. After two weeks of successful internship and accomplishment of the tasks, he realized that he would like to find a permanent basis in this company. And he was accepted Agromir company as Merchandiser in the same trading team PS1.

Working in this position, I passed DSPM training (training on the provision of goods to outlets, distribution, siloving, pressure, merchandising, etc.). He enjoyed getting new knowledge, it was easy for him to learn, because a good team and a friendly atmosphere helped him to adapt to his new position, all the personnel, including colleagues from neighboring departments directed him. During 6 months he showed excellent results, but he wanted to bring even more benefit to the company and go on a career ladder. At that time, there appeared a new vacancy for the position of Sales Representative, he did not have enough experience and skills to take this position, but he had great desire and ambitions. This position was in the department of "HoReCa" in which Yevgeniy Blednykh was the Head of the Department, and whom he was lucky to meet. Yengeniy gave him a chance to try himself as a Sales Representative, but put the condition that if the plan is not implemented within two months, Yasin will have to return to the position of Merchandiser. Yasin accepted the territory, got the goals and tasks from the supervisor,fulfilled the plan in the first month and got into the top five of the company's Sales Representatives. During the second month he managed to win in the motivation program for Sales Representatives. After 2 months, his results were excellent and he was approved for the position of Sales Representative. He tried to achieve the goals and objectives every month. During 2,5 years being in this position he was not just an employee, but a part of the company. Then the training for Sales Representatives started, they achieved such communication disciplines as "Seven steps of the visit", "Knowledge of the client", "Format of persuasive sales", and at the same time they learned Excel courses. Based on the results of the training, three Sales Representatives competed for the nomination of the Team Leader. And he was appointed as the Team Leader in the OSDO team. Three months after the interview with the Commercial Director, he was transferred to the position of Supervisor.

Thus, he works successfully as the Supervisor, currently at the PS2 team. The company «Agromir» is not just a company that recruits people for work, but also helps them to develop. In addition to interesting and useful trainings, «Agromir» company conducts various entertainment events so that it enables the whole collective not only to work well, but also to have a good rest. These are corporate trips to nature, New Year's Eve, football championship and other events, in which he actively participates. For example, he was chosen as the ground leader at the football championship.

He likes his work and his team very much, and he is very proud being part of Agromir!